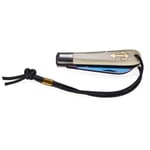 Pocketknife with Bone Handle and Anchor Inlay
In stock, Delivery in 6-7 days

Among the pocket knives from the Otter forge in Solingen, the anchor knife is a classic. A brass anchor is embedded in the bone knife handle as a distinguishing feature, riveted firmly to the handle and ground flush over. The folding, sharpened carbon steel hoof blade is blued - an interesting color contrast to the light tone of the knife hilt. It is suitable for the pulling cut.

In order to reduce stresses in the steel and thus prevent the material from breaking, steel is often blued after hardening (this is also referred to as tempering). For this purpose, the material is heated and then cooled again - the hardness of the steel decreases somewhat, but at the same time it also loses some of its brittleness and becomes tougher. During bluing, the material surface oxidizes and, depending on the tempering temperature, special tempering colors are formed. From about 300 ° C, for example, a bluish coloring is formed, as can be seen in our anchor knife.
At Otter, cutlery has been manufactured since 1840, and even today they rely mainly on manual labor.

The blade of the knife is blued on the surface. The blue sheen may wear off over time in use.