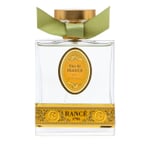 Founded in Grasse, the Maison de Parfumeurs, Rancé, is one of the oldest family businesses in the perfume industry. The glove maker Louis Rancé established the tradition of the house in the first half of the 17th century when, following the fashion of the time, he produced perfumed gloves. In 1795, his grandson François decided to devote himself exclusively to perfumery and quickly gained prominence, finally becoming Napoleon’s favourite perfumer. Over 100 years ago, the company moved to Milan, where Rancé is still based today. At Rancé, they composes new fragrances, just as well as they strive to preserve the creations of their ancestors from oblivion. The company’s extensive archive contains the compositions of all the fragrances that belong to the Rancé legacy. They draws on this source at Rancé, carefully adapting the recipes of the 18th and 19th centuries to current requirements. However, they don’t lose track of the chracter of the original composition. For the most part, Rancé has always used natural ingredients from flower petals and leaves, some of which are grown and cultivated in Grasse.

Eau de Toilette for women and men.
100 ml glass flacon with spray head
More articles of the manufacturer:
Have a question?