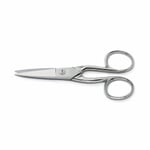 The strong and pointed blades of these scissors are ideally suited for short and strong cuts, as required when cutting buttonholes.

To acquire a good pair of scissors today means treasure hunting. Your first look should be at the connection between the two blades. If they are riveted, the scissors are destined for immediate consumption. After all, you can't resharpen them. (Beware: some rivets are disguised as screws on one side.) But resharpening 2-mark-fifty scissors would be nonsense: it costs more than the scissors themselves, and they wouldn't survive it anyway. And so there is one more disposable and trashy item: scissors that don't work, but don't live long, but don't cost anything either. Our scissors have only one thing in common with such: they cost as much as they are good for. Here, professional and household scissors come from renowned forges that have not yet resigned themselves to the flood of cheap products: from Robuso in Solingen, for example, or from Dovo. The quality standards in these traditionally oriented companies are not determined by DIN standards or Solingen laws, but by the state of the art, and here the art has never had to bow to the laws of mass production. Scissors are hot-forged there and largely made by hand. By the way, you can also hear the superior quality of our scissors: They sing quite finely when they move, because they actually touch each other only in one point.

To ensure that a pair of scissors is comfortable in the hand even with constant use - especially where the thumb and forefinger create the pressure required for cutting - a special processing of the scissors eyes is required. After forging and hardening the scissors, the surface of the eyes is very rough, has burrs and is covered with scale. In the simplest models, the burrs are simply covered over by a thick layer of varnish - a process that very inadequately attempts to circumvent an old but very costly working technique: that of pließtening, which only creates the conditions for a really clean chrome and nickel plating.In pließtening, the fine grinding of the scissors eyes is achieved with the help of a variety of different grinding wheels and abrasive belts, which differ in geometry, hardness and abrasive. Different tools are required for the different degrees of curvature on the scissors eye. The inner sides of the eyes are machined by threading the scissor eyes onto an abrasive belt, then placing the (continuous) abrasive belt on a running work roll and machining the eyes by skillfully rotating and guiding the scissor parts. A technique that requires great skill and a lot of experience and that used to be a matter of course for professional-quality scissors - until the 1970s, the (eye) pließterer was an apprenticeship.

Cut with your scissors only the material for which they are made. In order for them to retain their fine running, they need to be lightly greased every now and then when in use: It is enough to briefly run the heel of your hand over the blades. If you have their scissors resharpened from time to time, they have an almost unlimited life while maintaining their functionality.

The powerful blades of these scissors are ideal for short strong cuts, like you need for cutting out button-holes, pockets, or cutting tape. Carbon steel, high-gloss chrome. Polished inside blades. Length 5 inches (= 12.7 cm), cutting edge length 5 cm. Weight 50g.
More articles of the manufacturer:
Have a question?