Scented Candle Made of Rape Seed Wax in a Weck® Glass 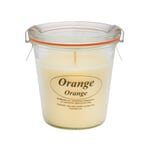 If you happen to be in Schleswig-Holstein in April and May, you will drive past many yellow rapeseed fields, which set off the wide, hilly landscape particularly beautifully. Rapeseed has always been one of the most important oil suppliers here, but it is also important for crop rotation in agriculture, among other things because it can break chains of infection in cereal diseases. While rapeseed oil was used primarily for lamp oil or lubricating oil for industry and for soap production until the mid-19th century, it was soon displaced by inexpensive petroleum-based fuels and cooking oils from overseas. It was not until the 1970s that canola oil could also be used as cooking oil and animal feed, thanks to new varieties that contain almost no bitter erucic acid. Since then, the area under cultivation has been steadily increasing and the range of uses has also been further developed.

The Itzehoer candle manufacturer produces these scented candles on the basis of rapeseed oil. This not only has the advantage of a regional, renewable raw material that can be procured on short transport routes, but the candles are purely vegetable, biodegradable and completely free of harmful substances. Rapeseed wax is also very well suited as a carrier for fragrance oils, which, initially safely enclosed by the wax, only fully develop their aroma when the candle burns down. Here it is pure essential oils that give the candles their pleasant fragrance. They come with a candle holder in the form of a classic Weck® jar with lid - and are therefore ready for immediate use.

Scented candle made of rape seed wax. Comes in a Weck® glass complete with rubber ring and holding clamps. Height 9 cm, Ø top 9 cm, Ø bottom 6.5 cm. Burning time approx. 14 hours. Made in Germany.
More articles of the manufacturer:
Have a question?