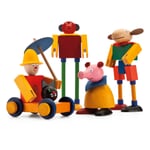 Schnuckenacks Snap-on Figures
In stock, Delivery in 6-7 days
For a delivery in time for Christmas please note the different "order by dates" in "shipping costs"

In this unique set, the colorful plug-in figures, which can be combined in countless variations, are only available from Manufactum. In particular, the pink piglet is an additional lucky charm specially designed by us; the manufacturer has also added a cable car gondola to the set of figures.

Snap-on, snap off. The Schnuckenacks.

There are practically no bounds for the imagination with these snap-on figures. Children quickly grasp the gist of the connectors.
In addition, the components are extremely durable and withstand damage even when you sit or step on them. The gallery of figures offered here is only available from Manufactum. In order to expand the possibilities for play the manufacturer added a cable railway (gondola H 12 x L 18 x W 9 cm).

Toys with history. From the Thuringian forest.

These snap-on figures were created in Leipzig by a young piano maker named Georg Kellner, who in 1914 began building working model airplane models as a hobby. He graduated to ship models driven by spring drives, electric motors and steam engines. After World War I he began fashioning workshop, handicraft and visual aids kits for schools. In 1930 Kellner developed a patented system of building blocks in different colors and shapes which could be fitted together with the aid of elastic connecting links, creating an entire cast of figures, mythical creatures, animals, vehicles and even cable railways: the Kellner snap-on figures were born. After World War II the company moved to Tabarz in the Thuringian Forest. Under socialism the wooden components were replaced by plastic and produced in series of hundreds of thousands. Converted into a state-owned company in 1972, production was shut down in 1989. However at the same time Hans Georg Kellner set up a workshop for wood design in Berlin and in 1992 he bought back the formerly family owned business in Tabarz. He re-established the line of famous snap-on figures in wood again, with leather and colored felt.

Toys with history. From the Thuringian Forest

The Schnuckenacks stick figures go back to Georg Kellner, a young piano maker who followed his passion in Leipzig in 1914 and began building airplane models capable of flight, which were followed by ship models, powered by spring drive, electric motor or steam engine. After the First World War, he began to offer construction kits, which soon became widely used as work, handicraft and demonstration materials in school lessons. In 1930, Kellner developed his patented system of building blocks of different colors and shapes that could be joined together by elastic connectors to form a wide variety of figures, mythical creatures, animals, vehicles or ropeways. The Kellner Steckfiguren were born. After the Second World War, the company moved to Tabarz in the Thuringian Forest. Under socialism, the wooden components of the boxes were replaced by plastic ones and mass-produced by the hundreds of thousands. The company, which was transferred to national ownership in 1972, had to cease production in 1989. At the same time, however, Hans Georg Kellner founded a workshop for wood design in Berlin, bought back the nationalized former family property in Tabarz in 1992 and reissued the famous plug-in figures - made of wood as before, supplemented by leather and colorful felt.

Please note: the snap-on figures are not suitable for children under 3 years of age because of the danger of choking on small parts.
More articles of the manufacturer:
Have a question?