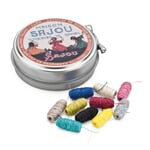 Maison Sajou: the Revival of an Old Tradition.

An old, much-loved French make: ‘Maison Sajou’. The firm was founded in 1830 and quickly established itself as the best address in France (and beyond) for delightful small domestic articles (e.g. for sewing). The founder, Jacques-Simon Sajou, won numerous First Class medals in various world exhibitions of domestic craftsmanship in the 19th century. In modern times, Madame Crestin-Billlet, an admirer and keen collector of Sajou’s work, especially his needlework pattern booklets, started to work on a series of handicraft manuals based on his ideas and found to her surprise that the brand name ‘Sajou’ wasn't in use since the 1950s. So she took the logical step of reviving the name and the business; her ‘Sajou’ products do honour to the name ‘Maison Sajou’ and its tradition.

Made by the spinners Ets. These sewing thread cocoons in many commonly used colors come from Toulemonde in the area of Lille in France that, in former times, used to be a traditional textile region. The cocoons are wound in a way that the thread comes out of the middle of the cocoons, so that it does not hang loosely on the outer side.