Soap Tray Made of Diatomite by Soil 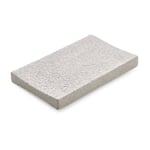 Soap Tray Made of Diatomite by Soil
White
In stock, Delivery in 6-7 days
For a delivery in time for Christmas please note the different "order by dates" in "shipping costs"

Stamped from the earth. Moisture-regulating products made from diatomaceous earth.

The dimensions are almost unimaginable: one milliliter of diatomaceous earth consists of a billion diatom shells and fragments. If you extrapolate that to a liter, it will make you dizzy. At the same time, however, the fossil sedimentary rock that formed in freshwater lakes from the interglacial period onward is anything but tightly packed, but is loosely layered and has countless tiny pores. As a result, it acts almost like a sponge: the diatomaceous earth absorbs moisture, stores it and thus has a moisture-regulating effect. In addition, it is lightweight, fire- and acid-resistant, stabilizes dispersions (i.e., mixtures of substances that do not combine well), and, last but not least, has exceptionally good filtering properties, which is why it is used, for example, to filter drinking water or beer and in swimming pools. Diatomaceous earth is also used in a variety of ways in the construction industry: in the manufacture of building materials, thermal insulation and paints. And last but not least, it shows great potential as an organic pesticide and as an abrasive.
Here, diatomaceous earth comes in a form traditionally used in Japan for plastering houses. The rock, ground into powder, is processed using plaster technology and molded by plasterers into breathable household items that, by not being glazed or otherwise further processed, completely take on the natural properties of diatomaceous earth. Isuguri, the company behind the "Soil" product label, has been in the construction business for over a hundred years, has been particularly active in the restoration of traditional Japanese architecture since 1989, and since 2004 has also been a supplier of design products such as these, which take particular advantage of the material's moisture-regulating properties. The colored diatomaceous earth in white, green and pink is completely natural: The white products are made from diatomaceous earth from Akita Prefecture, the pink diatomaceous earth comes from the Noto Peninsula in Ishikawa Prefecture, and finally the green is a mixture of white Akita earths and green earths and pigments. The surface feels almost a little chalky, but does not rub off.

Rectangular tray for soaps or sponges, for use in the bathroom or kitchen. The material absorbs the moisture of soap or sponge quickly and completely – the surface remains dry and clean. Tiny pebbles worked into the material contribute to the stability of the tray. We recommend removing soap residue or other deposits from time to time: Clean the surface with a scrubbing brush and some water, then let it dry before further use. Made of diatomite (diatomaceous earth). Length 13 cm, width 8 cm, height 1.5 cm. Weight 260 g.
More articles of the manufacturer:
Have a question?