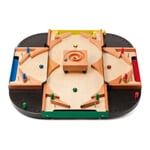 ‘Spirobille’ Family Flipper
Can be delivered at beginning of January, Place your order now

Spirobille is a simple game based on the billiards principle. A steel ball is ejected from the central section and rolls over the field of play in the direction of one of the players. His job is then to use a flipper to get the ball away from his own goal as quickly as possible, and shoot it into the goal of a competitor. All this has to be done at top-speed – a fashion that came in with the 1950s flipper games. (The original game, Jeu de Marteau, the ‘Hammer Game’, originated in France; here, the ball had to be ‘manoeuvred’ towards the opponent’s goal with a whole series of ‘hammer’ strokes.) Spirobille is most fun with four players, but can just as well be played with two or three players, in which case the unoccupied goals are closed off by steel bars. Spirobille is made in Switzerland, and is part of the standard range of so-called ‘Ludotheques’ (game libraries, so to speak), and as such has to conform to the demands and standards of the hiring and lending business. For this reason it’s very solidly constructed.

You’ll find four screws under the base that can be adjusted to ensure a level field of play. The flipper levers can if necessary be tightened with the enclosed spanner.

Community games of the first order. From Alfaset from Switzerland

The games from Alfaset impress with their exceptional quality of workmanship. This is because the Swiss manufacturer processes mainly domestic woods such as maple, birch and beech without compromise: The accuracy of fit of the individual components is impressive, the elements are neatly glued, the surfaces carefully treated. In short, the board games from Alfaset clearly stand out from the crowd. The same applies to their ability to inspire both children and adults. One of the reasons for this is that the rules are as simple as they are comprehensible, and success depends not on talent but to a large extent on lucky coincidences. This occasionally drives some people up the wall, but just as quickly brings them back to the board.
The games are all manufactured in the company's five workshops near Lake Neuchâtel. There, Alfaset mainly employs people with disabilities who work together with skilled carpenters.

The classic game of billiards has over time given birth to a whole series of small table games, each remaining true to the basic principle of ‘potting’ a ball in a hole or a pocket. What we offer here is a variant that’s both unusual and fascinating.

For 2-4 players. Base of steel components, MDF fibre board with a slightly curved playing area of beech ply wood. Central section, flippers and surrounds of solid red beech. Playing figures and 2 balls of stainless steel, Ø 1.5 cm. Height 9.5 cm. Width 52 cm, depth 52 cm. Weight 12.8 kg. Suitable for children of 3 and over.
Caution: Not suitable for children under 3. Risk of swallowing small parts and choking.
More articles of the manufacturer:
Have a question?