Sports Balance Board with Steel Core 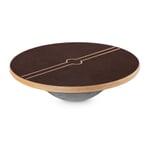 Sports Balance Board with Steel Core
In stock, Delivery in 4-5 days

Balance Board: to improve your Balance.

The human body can be said to be ‘in balance’ when all the forces that affect it at any one time ‘balance’ one another out. Our balance board presents a real challenge here. Standing on its own it looks the picture of stability: but when you stand on it it does its best to throw you off balance. It’s made on the same principle as the balance boards used by physiotherapists: but the ‘sports’ version, as this is called, has a base – with a steel core – several centimetres higher than the former and with a fully hemispherical shape rather than the usual ellipse. Altogether a severe sporting challenge for the would-be ‘balancer’. It’s a great way to improve your sense of balance and coordination, and to train the short foot muscles and long leg muscles right up to the pelvis as these exert themselves to compensate for the constant instability; the same goes for the buttock muscles if you kneel, sit or lie on it face down. All of the exercises – which are simplicity itself – should be done barefoot in order to train the sensitivity of the foot receptor nerves.
There’s also a very special ‘reward’ – unfortunately short-term – for the hardpressed user! If you manage for once, for a few seconds, to hold a steady, upright stance, you get an almost ethereal feeling of total calm. If you are, like us, of a philosophical turn of mind, you can then reflect on the irony of the human condition (or of human neurophysiology), which, after having confronted our bodies with the maximum dose of imbalance (or dysbalance), allows us to feel extra well balanced when we reach terra firma.