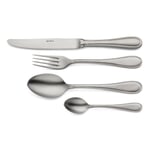 Table-Cutlery Set Made of Sandblasted Stainless Steel by Goyon-Chazeau
30-piece
In stock, Delivery in 4-5 days

Discover singular products that may remind you of items you already know and appreciate; however, these products – exclusively available from us – feature a refined design meeting our clear-cut requirements.

Since 1953 you find the Coutellerie Goyon-Chazeau seven kilometres east of the French city of knives, Thiers in the Auvergne-Rhône-Alpes region. While there used to be numerous smithies in the region, which has been known for its cutlery for seven centuries, the knife manufacture in La Monnerie-le-Montel is now one of the few that still cultivates traditional craft techniques. True to their conviction, they produce completely locally. In 2013, the French state awarded the third-generation family business a label, the EPV (Entreprise du Patrimoine Vivant), for its commitment to preserving traditional craftsmanship in cutlery production.