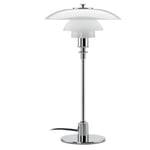 Highlight for Your Favourite Spot.

Since table lamps can be set up in a variety of ways, they can provide pleasant light wherever it is needed – which is why lighting consultants recommend them when you want to set up different levels of lighting in a room for a harmonious look. The PH 3/2 and PH 2/1 are particularly suitable for this purpose, as the following also applies to these models: About 12 % of the light passes through the opal glass shades – they are frosted on the inside by sandblasting – and can thus contribute to room lighting with soft and diffuse light distribution, while the majority of the light illuminates glare-free the spot under the lamp.

The lamps of the Danish manufacturer Louis Poulsen have been a benchmark for decades. They owe their development to the ground-breaking work of Poul Henningsen (1894–1967). After giving up his studies as an architect, he began working as a freelancer in the field of functional architecture. He followed his vision of creating an ideal lamp, a lamp that would provide completely non-reflective, indirect light and, at the same time, offer an efficient light yield. He was able to achieve this aim by cooperating with Louis Poulsen. The partnership began in 1925 and lasted until his death. Henningsen performed pioneering work concerning light structures, shades, reflection and light projection. In short, his work laid the foundation for the perception of light Louis Poulsen adheres to and set the framework for manufacturing lamps down to the present day.