Teapot Warmer Made of Oak Wood 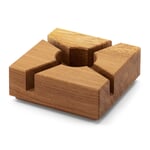 Teapot Warmer Made of Oak Wood
15 × 15 cm
In stock, Delivery in 5-6 days
For a delivery in time for Christmas please note the different "order by dates" in "shipping costs"

A product that leaves the workshop of Konrad Horsch is anything but just a piece of wood sawn or turned into shape - it is a piece of wood with a history. For every knife edge that passes through his hands, every rolling pin that he puts the finishing touches on, he can provide the biography: Where was the tree from which the workpiece is made, when was it felled and under what circumstances, which plants, animals or fungi have left traces in the wood, why and in what form? Instead of buying from a timber merchant, he therefore prefers to buy his raw material from where it grew - then, as they say in specialist circles, he "negotiates standing on the trunk". Or he recycles old wood and puts it to a new use, often inspired by its original purpose.

Working only with solid wood is a matter of course for the cabinetmaker from Iserlohn, in manufactory and with minimal use of machinery. Every object that bears his name is made by him, regardless of whether it is a one-off piece such as large solitaire furniture, art objects for public spaces or even products made in small series such as those in the Manufactum range. Even if they are not unique, they are made with the same attention to detail as one-of-a-kind pieces, something Horsch learned during his studies with the well-known cabinetmaker James Krenov in California. Last but not least, the character of the wood alone makes each piece unique. Knotholes, annual rings and grains are not uniform - and if they were, the wood would lose its appeal for Horsch.

Old church pews to be discarded? - Elsewhere they would be burned, but at the St. Viktor parish in Schwerte an der Ruhr they pick up the phone and offer them to Konrad Horsch from nearby Iserlohn, who reuses the wood and puts it into a new context. He produces a total of twelve workpieces from the wood of the benches, some of them sacred, such as a meditation bench, and others quite profane, such as the teapot. In reference to Christian symbolism, the teapot warmer bears a cross that is arranged at a slight angle to improve airflow. While the meditation bench did not go into production, a teapot warmer modeled on the first design is now available in a secular frame, giving at most a hint of its sacred background. It is made from a solid piece of oak with a shadow gap on the underside, which gives the solid piece a lighter feel. The flat surface makes the teapot suitable for pots of all sizes and can also be used to keep food warm.