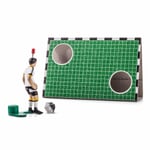 As Phil Woosnam puts it: "The rules of soccer are very simple, basically it is this: if it moves, kick it. If it doesn't move, kick it until it does." – The principle of the "Torwand" (goal wall) calls for a challenge following the second part of the saying. It became fantastically popular in Germany after being introduced in 1964 with the TV sports show "das aktuelle sportstudio". The game idea is as simple as it is ingenious: in three attempts for each, the player must shoot the ball through holes in the wall representing a soccer goal, one hole positioned top left and the other one on the bottom right. As this is far easier in theory than it is in practice, stories of famous hits and misses are now the stuff of legend. One such story is of Eusebio, top scorer at the 1966 World Cup, who could not even sink one ball in the holes in front of the studio cameras, but who, off camera, finally managed to score on his 36th attempt. Or there is comedian Otto Waalkes, who managed to shoot the ball backwards through the upper hole with his heel, or Franz Beckenbauer, who not only scored four times, but also shot the ball from a wheat beer glass into the bottom hole, and not least Fatmire Bajramaj (member of the women's national football team of Germany, 2005–2015), who scored twice in the bottom hole whilst wearing 3 inch heels. Günter Netzer and Rudi Völler are amongst the very few who have scored five times – so far no one has been able to score six times; even though experimental physicist Metin Tolan has developed an exact formula for success!
Now you can try your luck at the "Torwand", on a smaller scale, in "Tipp-Kick" format. The Tipp-Kick football player has a movable, suspended leg, which at the push of a button, and with the help of a lever mechanism, kicks the twelve-sided, black and white ball. In contrast to the usual Tipp-Kick field players, however, the penalty kicker shoots with the inside of the foot, which makes scoring through the round holes a little easier (even if only a little).