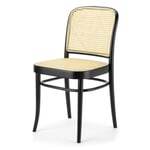 These clay models of a furniture with seat and backrest made of peddig cane weave lean on the proven, classic design - and of course the associated frames are also made in classic bentwood technique. From split and stained peddigree are created the fine, yet strong braids, which are finally firmly connected to the frames by hand by triple draw-in through holes in the chair rabbet.

How the wood was bent

Revolutions in furniture making are a rather rare thing. The perfection of the bentwood chair by Michael Thonet (1796-1871) was such a revolutionary act - in three respects. From a technical point of view, the revolution had been in the offing since about 1830. Michael Thonet experimented with methods of making wood bendable under the effect of steam and glue water. He improved them step by step; in 1852, after several attempts, he finally obtained a patent that protected his method of "giving wood any bend and shape in various directions by cutting it up and gluing it back together." "Any bend" - this phrase hints at the second revolution. With the help of bentwood technology, it was also possible to break new ground in design; simple semicircular arches as backrests, round-shaped yet solid-wood combinations of chair backs and backrests, or even curved chair leg reinforcements were not only technical innovations, but also innovations in design. Thirdly, bentwood furniture marked an economic revolution. They were not only suitable for production on an industrial scale, they virtually required it. And so, even during Michael Thonet's lifetime, the idea of bentwood furniture led to an industry of its own. His sons and successors mass-produced bentwood chairs and founded numerous manufacturing plants, primarily in the Eastern European region, which at the time belonged to imperial and royal Austria. Austria, where labor was cheap and the supply of beech wood was almost inexhaustible. One of these factories was established in 1861 in the Moravian town of Bystritz am Hostein, now Bystrice pod Hostýnem in the Czech Republic. It operates after a checkered history as an independent joint stock company under the name TON (továrny na ohýbaný nábytek, in German "factory for bentwood furniture") still today: Bystritz is the oldest place in the world where furniture is made by bending wood by hand.

These chairs come from the former Thonet factory in the Czech republic and are made in part with the old machinery. Thonet developed the bent wood technique which makes it possible to bend wood by applying steam and diluted glue.
More articles of the manufacturer:
Have a question?