Tray Made of Aluminium 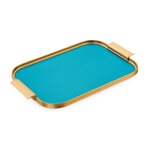 Tray Made of Aluminium
Turquoise
In stock, Delivery in 6-7 days

British archetype of the 50s.

Since 1947, the London manufacturer Kaymet produces trays and serving trolleys made of aluminum, which are used mainly in hotels, hospitals and catering. The most distinctive feature of the trays, set in a frame of aluminum profiles, is the rough-textured, color-anodized surface of the base. This promotes the stability of the tray, is intended to increase slip resistance and is particularly effective in the lighter color variants.
The idea of manufacturing trays and serving trolleys from anodized aluminum came to Kaymet founder Sydney Schreiber in the mid-1940s. During the Second World War, the company had manufactured aluminum parts for radios and radar sets, but after the end of the war, the factory was looking for a way to use the machines for other purposes. The trays and trolleys manufactured entirely in the London plant met the taste of the times - Kaymet was able to employ around 200 people in the 1960s. Then, when plastic products flooded the market in the 1970s and serving trolleys went out of fashion, sales plummeted. Since 2013, the archetypal aluminum trays and serving trolleys are now back. Although produced in smaller quantities today than in their heyday, the manufacturing steps at Kaymet are still the same as they were back in 1947.