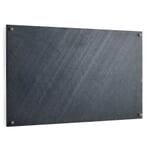 Wall Slate Blackboard from Fredeburg
In stock, Delivery in 6-7 days
For a delivery in time for Christmas please note the different "order by dates" in "shipping costs"

Discover unique products designed exclusively by Manufactum and made especially for us according to our specifications – you will find these products exclusively at Manufactum.

A typical slate landscape is rather hilly, with undulating plateaux and gentle protuberances riven by rough-looking valleys with cliff-like sides. The slate hills in Germany – in the Rhine Valley and Thuringia – are like this. The so-called ‘blue gold’ mined there has over the centuries produced a rich roofing (Altdeutsche Deckung) and house-fronting culture. Slate is still mined in Fredeburg (in Sauerland, central Germany), in the Moselle valley, in the nearby Hunsrück and in Thuringia – for house-building, and also for articles like our blackboard.

The board is attached to the wall by hanger bolts; the gap between board and wall can be adjusted by means of a hexagonal nut – to give an even appearance. The cap nuts come in two formats, nickel-plated steel and brass.

Where the foliated (slate) rock from the Devonian period comes to the earth's surface, it forms peculiar mountain landscapes with undulating plateaus and mild heights, furrowed by rugged valleys with cliff-like rising valley walls. In Germany, this is the case in the Rhenish and Thuringian Slate Mountains. There, the "blue gold" has become culture, namely building culture, as facade cladding or roofing in the typical local geometry or the famous "old German covering". In Germany, clay slate is still mined in the Sauerland (Fredeburg), on the Moselle (Katzenberg), in the Hunsrück and in Thuringia - for building purposes, but also for those we are dealing with here: In addition to roofing slate, there is also table slate and stylus slate.

We’ve had this board made for us from pure, finely cut and polished Fredeburg slate, for writing on with chalk or slate pencil. This beautifully proportioned unframed board has been given four holes at the corners so it can be attached to the wall either flat or upright. Attachment kit provided.