Filled Pencil Case Made of Leather by Sonnenleder 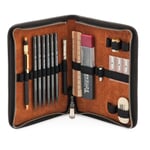 Filled Pencil Case Made of Leather by Sonnenleder
Black
In stock, Delivery in 5-6 days

Discover unique products designed exclusively by Manufactum and made especially for us according to our specifications – you will find these products exclusively at Manufactum.

... to fill a writing case like this one: six Monolith graphite pencils (all gradations), a Toison d'Or lead holder with twelve spare graphite leads (Ø 2 mm), a pencil sharpener Grenade with three spare blades, a small Rumold ruler (10 cm scale) made of hornbeam and pear wood, an eraser, a pencil extender, a pencil cap. The case made of pit-tanned Allgäu cowhide is carefully sewn.

Leather from the pit. Red tanned

Sonnenleder in Bodman-Ludwigshafen on Lake Constance in the Hegau region of Germany stands for consistently purposeful, pure design. The meticulously working company still maintains the traditional process in leather production: pit tanning. Only hides from southern German cattle are used for this purpose. The tanning agents used contain mainly decoctions from bark, roots and fruits. In twelve pits with slightly increasing concentrations of tanning liquors, they convert the protein fibers of the cattle hides into leather fibers over a period of six to twelve weeks.
After tanning, the hides are air-dried and greased in a lubricating vat according to a well-kept recipe. Untanned, the finished leather thus has a characteristic light tan-reddish hue, which also gave the leather the name "red-tanned" and which varies from lot to lot. Use, sun and rain change the hue, and over time a natural protection forms, the patina, which gives the leather a distinctive appearance. The leather dyed in the barrel also acquires a shiny patina with use.

Cowhide leather pit tanned, origin Germany. Undyed or dyed through black in the barrel. Zipper and handle plate made of nickel-plated brass. Made in Hungary.
Length 14 cm, width 20,5 cm, height 2,5 cm. Weight 380 g.
More articles of the manufacturer:
Have a question?