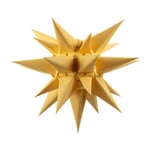 Herrnhut Star 40 cm
Yellow
In stock, Delivery in 5-6 days
For a delivery in time for Christmas please note the different "order by dates" in "shipping costs"

A success story. Told again and again with pleasure

The famous Advent Star of the Moravian Brethren, with its impressive 25 rays, has been in our range for many years and continues to enjoy great demand - one more reason to offer it in a slightly smaller version with a diameter of 40 cm. Like its big brother, this smaller star can shine with the aid of a maximum 40-watt incandescent lamp, but it also contributes to an atmospheric ambience when unlit.

The star is manufactured by Herrnhuter Sterne GmbH - formerly the "Herrnhuter Brüdergemeine", a religious community of Moravian immigrants that named itself after the East Saxon community of Herrnhut founded by its members in 1722. Their influence on Christian life in Germany was considerable: even the custom, still widespread today in Saxony and Hesse, of assembling a large star in family circles on the first Sunday of Advent, the light of which shines until Christmas, goes back to them.

The star has always been a "good thing" in our sense, on which we could even improve one detail: The electrification of the Herrnhuter Sterne is done via a textile-sheathed cable. You can order the indoor electrification separately; it fits both the large and small stars.

Made of paper. Ø 40 cm. Weight 110 g. Mounting brackets, two spare prongs and an additional hanging bar are included. Detailed assembly instructions are enclosed. Without electrification.
More articles of the manufacturer:
Have a question?