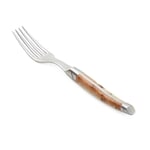 The steak fork by Goyon Chazeau in Thiers is made from two forged sections: the handle made of stainless steel and the four sharp tines made from the same material are carefully ground and polished to a sheen. The individual parts are cleanly soldered, and the grips made of fine-grained juniper wood are then fitted.  This process, called "monocoque", is also used for certain forged table knives. It has been perfected over the last 40 years in the workshop of Goyon Chazeau, where it was exclusively developed. The French state has meanwhile distinguished the firm in the Auvergne for upholding traditional tableware craftsmanship with the prestigious title "Entreprise du Patrimoine Vivant" (EPV, i.e. company engaged in keeping the cultural heritage vital).

Since 1953 you find the Coutellerie Goyon-Chazeau seven kilometres east of the French city of knives, Thiers in the Auvergne-Rhône-Alpes region. While there used to be numerous smithies in the region, which has been known for its cutlery for seven centuries, the knife manufacture in La Monnerie-le-Montel is now one of the few that still cultivates traditional craft techniques. True to their conviction, they produce completely locally. In 2013, the French state awarded the third-generation family business a label, the EPV (Entreprise du Patrimoine Vivant), for its commitment to preserving traditional craftsmanship in cutlery production.

Forged from stainless steel, the palm and handle are soldered. Grips made of juniper wood. Length 22 cm. Weight 100 g.
More articles of the manufacturer:
Have a question?