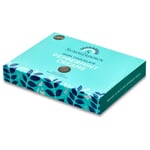 Summerdown English mint cream chocolates
In stock, Delivery in 6-7 days
For a delivery in time for Christmas please note the different "order by dates" in "shipping costs"

A traditionally English presentation form of peppermint are cream-filled thalers, which here are just under 1.5 cm high and thus particularly lush. Their rich flavor is provided by the cool, refreshing and creamy melting fondant filling of pleasant sweetness prepared with the English Black Mitcham peppermint oil, which makes a thoroughly harmonious combination with the rich dark chocolate coating.

Until the early 20th century, England was famous for exceptionally good mint. Sir Michael Colman, born in 1928 and involved in spices and pungency as a mustard maker for more than four decades, decided in 1995 to revive this quality and counter the often discordant peppermint oils, mostly imported from Asia, with ones that have the clear, balanced flavor of English peppermint. To this end, he runs a farm in Hampshire, where he extracts the essential oil of the famous Black Mitcham mint directly after harvesting from the field-fresh plants - in a specially constructed distillery. The result is a rarely intense varietal peppermint oil that is second to none.

May contain traces of nuts and milk.

Store in a cool and dry place.

A slight gray haze on the products is not a sign of old chocolate, but of leaking mint oil.

200 g package
More articles of the manufacturer:
Have a question?